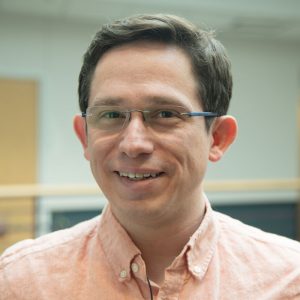 Eric currently serves as the Operations and Technical Manager for the Cryo-EM Research Center at UW-Madison. Eric has a passion for structural enzymology and ribonucleoprotein structure. Upon joining the Department of Biochemistry in 2013, he helped Dave Brow and Sam Butcher use X-ray diffraction methods to determine the first high-resolution structures of the U6 small nuclear ribonucleoprotein (Montemayor et al, NSMB 2014; Montemayor et al, Nature Comm. 2018). Eric became a member of Elizabeth Wright’s research group in the summer of 2018, prior to joining the cryo-EM facility’s operations team in January of 2020.

Eric received his Ph.D. in Physical Chemistry from the University of Texas at Austin in 2008 and subsequently performed his postdoctoral training at the University of Texas Health Science Center. He is an active member of the American Crystallographic Association and recently served on the US National Committee for Crystallography in the National Academies of Sciences (USNC/Cr). Eric was a participant in the inaugural Cold Spring Harbor course in Cryo-EM methods in March of 2018. In the Fall of 2019, he served as a 3-month embedded trainee at the NIH National Center for Cryo-EM Access and Training (NCCAT) at the New York Structural Biology Center.