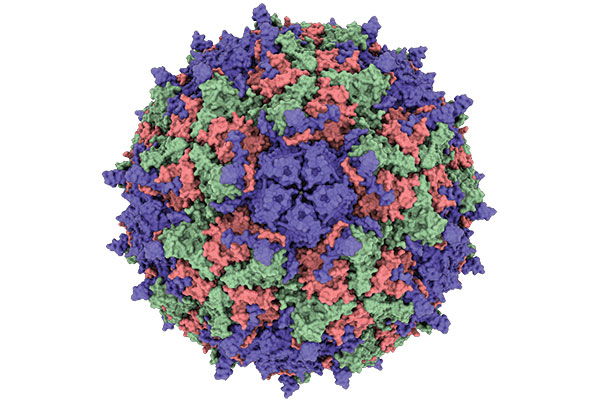 Structural biology and collaboration are two strong and enduring aspects of research at the University of Wisconsin–Madison. In keeping with this tradition, the Department of Biochemistry has led a concerted cross-campus effort to bring cryo-electron microscopy (cryo-EM) to campus.

Cryo-EM has recently advanced to a point that it can generate high-resolution structures of biological molecules by using electrons to generate images. Thus, cryo-EM is a burgeoning technology that can help UW–Madison researchers make significant new contributions to many areas of structural biology, including enzymology, virology, cell biology, and medicine. These discoveries will lead to a better understanding of many diseases and possible treatments.

Last October, the 2017 Nobel Prize in Chemistry was awarded to Jacques Dubochet (University of Lausanne), Joachim Frank (Columbia University), and Richard Henderson (MRC Laboratory of Molecular Biology) for their development of the experimental and computational methods that underpin the remarkable versatility of this technology.

“Cryo-EM has emerged as an indispensable method for structural analysis in the biosciences,” says biochemistry professor Robert Landick, one of the leaders on the project. “It is not hyperbole to say that it is revolutionizing our understanding of large macromolecular machines. For UW–Madison to remain a powerhouse in bioscience research, it is crucial that modern cryo-EM capabilities be brought to campus.”

Creating a new facility in Biochemistry

A new research facility, yet to be named, will be housed in the Hector F. DeLuca Biochemical Sciences Complex, and its users will come from across campus and beyond. Researchers are planning to use state-of-the-art, powerful microscopes to study everything from whole cells to organelles and single enzymes. The Morgridge Institute for Research, Office of the Vice Chancellor for Research and Graduate Education (VCRGE), School of Medicine and Public Health, UW Carbone Cancer Center, and Departments of Biomolecular Chemistry and Neuroscience are key partners with the Department of Biochemistry in the effort to establish this multi-million-dollar facility.

The facility is expected to open in 2019. Currently, the department is searching for faculty members who are leaders in cryo-EM research and would want to join the department’s efforts. Because of the breadth of applications of cryo-EM, this will inevitably draw the department into new areas, and at the same time, build on others.

To jump-start the creation and operation of the facility, Landick led an effort to obtain a UW2020 grant from the VCRGE. Desirée Benefield, a Ph.D. scientist and expert in cryo-EM was hired shortly thereafter. She has already been playing an integral role in the facility’s success by providing guidance to the facility’s future users, such as training them in sample preparation, imaging, and analysis.

“I’ve been working with interested researchers on campus to walk them through how a cryo-EM project develops, from sample preparation to data acquisition,” she explains. “I’ve also been getting resources together for new users to get started on their projects. For example, I’ve got workspace set up for preparing negatively stained EM grids, an important start for most cryo-EM projects. It’s been humbling to be part of something that’s so important for the department and the university.”

Benefield studied biochemistry at the University of Tennessee-Chattanooga and completed her Ph.D. in microbiology at Vanderbilt University. There, she learned about cryo-EM and became enthralled with the technique.  In 2014, she came to UW–Madison for postdoctoral training in the lab of virology professor Paul Ahlquist, who aims to use the new facility to visualize the structure associated with the replication of viruses responsible for Zika, MERS, SARS, Dengue Fever, and Chikungunya.

“Desirée’s effort is essential to the operation of a modern cryo-EM research facility,” Landick says. “With this project underway, we are excited to have a staff member on board to anchor our efforts to establish this facility.”

Impact built on a strong and broad foundation

Cryo-EM is a technique that allows researchers to get an extremely detailed look at a molecular structure. This allows them to uncover how a protein works and how mutations change that. Knowledge of structure provides a solid foundation for the design of new protein functions, enhancement of pathways to make valuable bioproducts,
and improvements in many other bioprocesses.

Cryo-EM can produce detailed structures needed to define the location, architecture, and dynamics of a wide array of biological molecules, such as cellular membranes, organelles, cell-cell contacts, and interactions of a virus with a host during infection. These images can transform our understanding of scientific challenges that span across all of biotechnology and biomedical research, including the molecular basis for diseases, and the discovery and development of drug treatments and other novel therapies.

At UW–Madison, faculty are exploring every corner of these areas — from biochemistry professors John Markley and David Pagliarini studying the mechanistic origins of mitochondrial disease to bacteriology professor Katrina Forest investigating the structure of tiny microbes often abundant in fresh water.

Professor of botany and genetics Marisa Oteguistudies the mechanisms plant cells use to regulate and traffic proteins to discern how they impact cell signaling and development. Cryo-EM helps her obtain useful 3-D images of organelles and the cell membrane to visualize these processes directly. Additionally, biomolecular chemistry professor Anjon Audhya investigates the mechanisms by which vesicular transport carriers are generated, which will facilitate a better understanding of how cellular homeostasis is maintained during development and disease progression.

In virology, biochemistry and Institute for Molecular Virology professor Ann Palmenberg recently solved the structure of a virus responsible for asthma in small children. Up until now, she has collaborated with Purdue University because they have cryo-EM equipment, which UW–Madison will soon have.

Building on a strong tradition and community

The facility will also foster collaborations on and off campus, as well as have an impact on teaching. Many of the faculty coming together to establish the facility are working to design coursework to teach undergraduates and graduate students about this new technology.

“The Department of Biochemistry and its alumni and friends have made many contributions to the infrastructure that researchers need to incorporate structural approaches into their experiments,” Chair Brian Fox says. “Over decades, results from our investments in x-ray crystallography and biological NMR spectroscopy have been sustained and profound. With this new commitment to cryo-EM, the department intends to continue its tradition of fostering cutting edge biological research. We look forward to sharing exciting results from this effort in future newsletters, and in other communications. If you are inspired by this initiative, please let us know.”

Story by: Kaine Korzekwa for the Department of Biochemistry. Photo By: Ann Palmenberg and research team.